After last weeks miserable failure we were looking forward to some more settled conditions for this mornings session. The winds had switched to a Westerly direction for the latter part of the week and were brisk but forecast to relent for the weekend. Come friday they had indeed eased but switched back to a South Easterly. Not ideal for our choice of early season venue, and confidence dropped. Still, there is always a chance and the morning dawned bright and calm, so we ventured out for a couple of hours,if only for a bit of casting practise and some fresh salt air with which to fill our lungs. Despite the gentle cool breeze, it still felt warm and we enjoyed the feel of the water and the chance to cast a fly line properly once again, a few ‘weed fish’ had us momentarily catching our breath occasionally while we hoped they would turn into a Bass, but we were kidding ourselves of course. Sea temperature is around 8 degrees centigrade at the moment, opinion varies as the optimum temperature for the fish to begin feeding in earnest, but personal experience with both salt and coarse fishing leads me to believe 10 degrees is a realistic starting point. The good thing is that we are no too far away from that starting point. 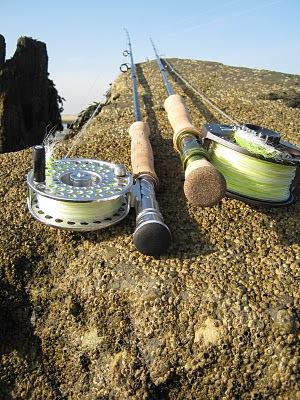 Previous: ‘Four inches longer….
Next: Fun at the Beach!

This site uses Akismet to reduce spam. Learn how your comment data is processed.

We are mad about lure fishing and test every product before it goes into the shop; if it doesn’t work we don’t sell it!

Our aim is to give you a customer experience second to none and help you to put more fish on the bank.

If you love Lure fishing for predators then why not try making your own jig flies and predator flies?

Our Fly Tying shop is full of great materials as well as advice, fly tying videos and guides.